Streetcars — once pulled by horses — have been on Philadelphia’s roads since 1858, but on December 15, 1892, the city received a “shock” to its transit system: that’s when the electric trolley hit the city’s rails for the first time, on the Catharine-Bainbridge Line. 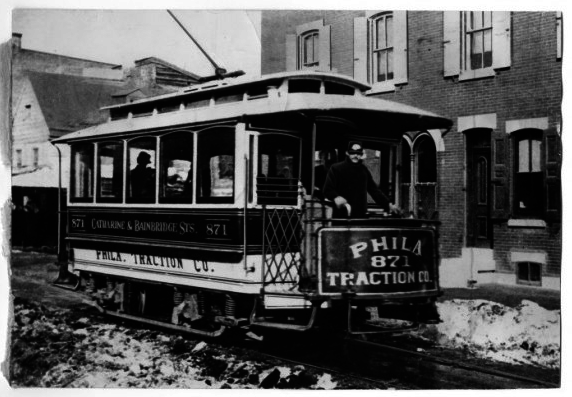 The Catharine-Bainbridge Line, no longer in operation, was Philadelphia’s first horse drawn streetcar line, as well as its first electric trolley line.

For more than 150 years, streetcars have served the Philadelphia area and helped Center City Philadelphia retain its commercial, retail, and entertainment supremacy in an ever-expanding region. By the Centennial year of 1876, Philadelphia could claim the largest street railway system in the country. Although true, this claim was also a result of the city’s many narrow, one-way streets that meant that many streetcars traveled out of the city on one street, then returned on another, thus doubling the length of track in use.

Although the motive power switched from horses to electricity (with short detours into steam and cable), most change has been evolutionary versus revolutionary. For example, the Great Epizootic, a fast-moving equine flu, affected most horses throughout the nation. Although many horses recovered, the outbreak caused streetcar operators to consider other means of power. Operators first tried steam engines on the street railways in 1876 and 1877-8, but these were unsuccessful and unpopular. In 1883 a trio of entrepreneurs, William Kemble, Peter A. B. Widener, and William Lukens Elkins, formed the Philadelphia Traction Company to acquire existing streetcar lines and convert them to cable operation. By the mid-1880s, however, the electric trolley was invented and it was clearly the technology of the future.

SEPTA’s Route 11 is the oldest trolley line in Philadelphia still operating over a considerable portion of its original route. Horse car service over that route, operating from 32nd Street and Woodland Avenue to 9th and Main Streets in Darby, Delaware County, commenced on December 24, 1858. The line was electrified on May 29, 1894 and was extended to Front and Chestnut Streets on August 17, 1896. Route 11 began service in the Subway-Surface tunnel from West Philadelphia to Center City (15th Street Station) on December 15, 1905. The tunnel was extended to 13th Street in June 1908. Today, the Route 11 operates out of SEPTA’s Elmwood Depot, from 13th and Market Streets in Philadelphia to Darby Transportation Center on Main Street between 9th and10th in Darby. Five routes, 10, 11, 13, 34 and 36 operate in the Subway-Surface tunnel. All together, the five lines operate on about 39.6 miles (63.7 km) of route.

To celebrate 125 years of electric streetcar service in Philadelphia, we wrapped one of our current trolleys to resemble an 1892 streetcar. The anniversary trolley will operate on SEPTA Routes 11, 13, 34 and 36 over the next year. We invite you to look for this trolley in your travels, snap a photo and post to social media using #TrolleyLove. We also invite you to enter this contest - you could win a February TransPass!