Top of Page Skip to Content
Just For Fun 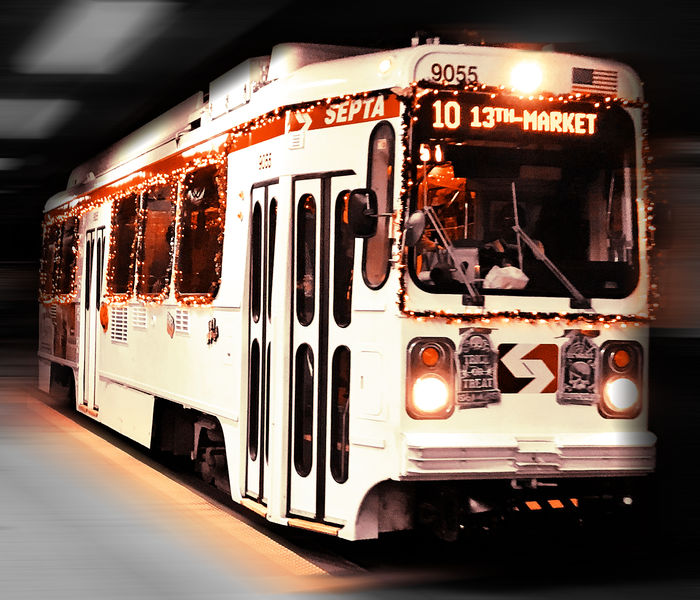 There are so many great ways to celebrate Halloween all around Philadelphia. And thanks to SEPTA, there's no need to get spooked by driving downtown or paying premiums for parking — SEPTA can take you to and from all of the hottest spots during Spooky Szn (and then of course, every other season of the year as well).

With some exciting new spots to accompany the old faithful haunts, we figured we'd highlight the easiest, most direct routes there — which are sans headless horseman.

The Nightmare Before Tinsel Halloween Pop-up Bar on (116 S.12th Street): Come for the costumed bartenders, a room of 1,001 eyes, a coffin with a skeleton, zombie wall, a spider web alley, and stay for the themed drinks. Get it while it lasts; Nightmare turns back into a Christmas store pop-up after Halloween night! Get here on Bus routes 9, 12, 21, 38, 42, and 45, or a short walk from Walnut-Locust Station on the Broad Street Line, 13th Street Station on the Market-Frankford Line and Trolleys 10, 11, 13, 34, and 36, or Regional Rail to Jefferson Station.

Haunt: find this on the second floor of the Pearl Tavern (1123 Walnut Street). Check out Halloween themed cocktails and spooky horror-movie-themed decor. There's also a full slate of special-events programming, including movie nights and collabs with beer and spirit brands. Get here on Bus routes 9, 12, 21, 42, and 45, or a short walk from Walnut-Locust Station on the Broad Street Line, 13th Street Station on the Market-Frankford Line and Trolleys 10, 11, 13, 34, and 36, or Regional Rail to Jefferson Station. Maybe your ride will be haunted too!

2nd Sanctuary is a bit more cerebral, and much more than just a bar! This once Victorian-era church (21st and Christian Street) is hosting 1970s-themed attractions during the season. "The Phantom Portal VR Telecom Tour in the Spectral Garden Chapel” is an experience combining virtual reality, live action, and immersive theater. A second, “Dancing Dead Live,” is a performance telling what is described as the story of an old man dancing with death, watching his friends die, waltzing with a skeleton, and then digging them up. A third, “Zoltan’s Zarkade Escape Room in the Lost Lodge,” is an escape room based on the mystery of “Kid Scout Troop 244,” who disappeared one by one in the fall of 1975. Each of these experiences requires separate tickets. A maze and a costumed zombie-disco party (complete with cash bar) are free with a ticket. Bus routes 17 and 64 both get you close.

Dark Passage was masterminded by Penn alum Sarah Elger, who designed theme park attractions for Disney and for Universal Creative (including Skull Island: Reign of Kong and Volcano Bay at Universal Orlando), and conceived this barroom experience as part of her Penn master’s of architecture thesis. Find Dark Passage for a limited time this Halloween season at 1004 Buttonwood Street. It's a themed indoor maze with a twist: guests start their tour the Strange Spirits Lounge and may take their cocktails with them on their journey through “an infernal take on the afterlife." Organizers say Dark Passage may take 30 minutes to two hours. To get there, hop the Broad Street Line to Spring Garden or Routes 23, 43, and 45 drop you minutes from this haunt.

Of course, if this seems a bit too scary, or if you're just looking for some more traditional Halloween fear, you can always head to Eastern State Penitentiary for their Terror Behind the Walls. And you know what's not scary? Saving $3 on tickets with your SEPTA Key or Pass. Get here on SEPTA Bus routes 7, 32, 33, 43, and 48.

For a more family friendly seasonal event, check out Jack’s Pumpkin Glow in Fairmount Park, where meticulously carved, illuminated pumpkins will light up your night. Pumpkin-carving demonstrations and seasonal food and drinks accompany the huge display to truly turn the space into a fall wonderland. Get there on SEPTA Bus routes 38 and 40 and the Route 15 Trolley.

Want to watch Halloween on stage? The Philly POPS and Live Nation present two performances of Disney’s The Nightmare Before Christmas, at the Met! In a nod to the Hollywood Bowl’s productions of Tim Burton’s masterpiece, the Philly POPS will perform the film’s classic score alongside the original film. Everyone is invited to attend in costume; Tim Burton-themed costumes are especially encouraged. This performance will be the POPS’ first live-to-film concert — made possible by the Met Philadelphia’s state-of-the-art audio and video equipment and is part of the Philly POPS at the Met Philadelphia concert series, which brings innovative programming and contemporary artists to the Met Philadelphia’s newly-restored stage. Best way there is SEPTA! The Met is approximately 2 blocks south of the Girard Street Station & 3 blocks north of the Fairmount Station on the Broad Street Line. You can also take the Route 4 or Route 16 to Poplar and Broad Street. Or take the Route 15 Trolley to the Girard and Broad Street stop. This stop is approximately 2 blocks north of the venue. Click Plan Your Trip to find your best way there!

To get excited for the big night (Halloween) the week beforehand, head to Xfinity Live! for a combined  party: Friday, 10/25 will host both the Wicked and Nightmare on Broad Street Halloween Bash for the biggest and best Halloween part in town! Get there on the Broad Street Line! Hop it south to NRG Station (last stop). And we're giving out free tickets to the event! Want the free tickets? Comment below with Taking SEPTA to Spooky Szn! Five lucky entries will be selected at random to win two tickets.

There is so much going on as always during Spooky Szn, and we encourage you to take advantage of all of Philly's fun frights! Let SEPTA be your ride out and your safest (and surge-free!) way to get home. Happy haunting!