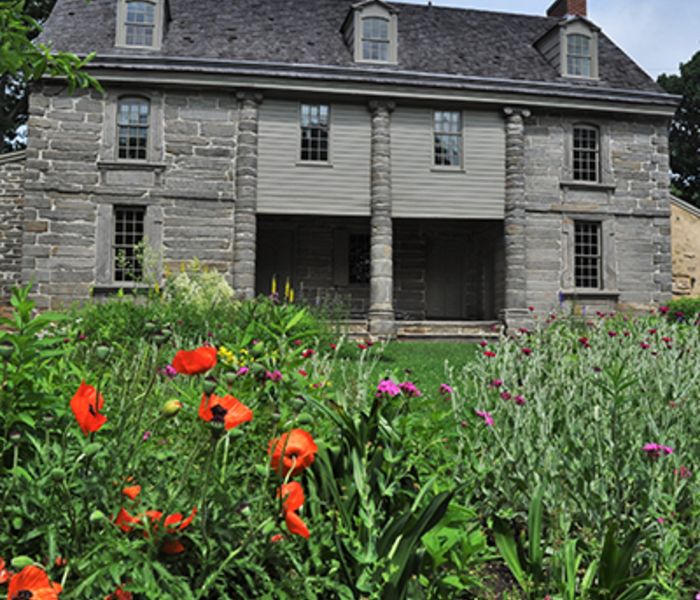 Bartram’s Garden is a 45-acre National Historic Landmark operated by the John Bartram Association in cooperation with Philadelphia Parks and Recreation. Located on the west bank of the Schuylkill River, it was established circa 1728, making it the oldest surviving botanic garden in North America. Today, Bartram's Garden is a destination and an outdoor classroom, living laboratory, and membership organization for ever-expanding audiences nearly 40,000 each year and counting.

John Bartram was an American botonist, explorer, and plant collector. He founded the garden in September 1728 when he purchased a 102-acre farm in the Kingsessing section of Philadelphia. Beginning as a personal landscape, John's garden soon grew to become an impressive collection of species he discovered during exploration. By the mid-18th Century, Bartram's Garden contained the most diverse collection of North American plants in the world. John Bartram was now at the center of the lucrative business of international plant trading. After John's death in 1777, his sons, followed by his granddaughter continued his legacy by maintaining the garden and trading plants internationally. In 1850, financial difficulties led to the trade of the historic garden to Andrew Eastwick, who preserved it as a private park. Upon Eastwick's death in 1879, the City of Philadelphia gained control of the garden and it remains a protected city park today. Since then, the John Bartram Association has overseen the preservation of the garden, the John Bartram House, and other buildings on the property. Today, Bartram’s Garden invites visitors to explore, connect to nature, participate in programs, celebrate personal journeys, relax, reflect, and experience something new. The grounds are free and open to the public year-round, dawn to dusk. Guided tours are approximately 45 minutes long and are offered Thursday through Sunday until December 3. These tours provide fascinating information about the history and species of Bartram's Garden, including the country's oldest ginkgo tree and the Franklina alatamaha tree, two of Bartram's most famous discoveries. You can receive $2 off tours with this Perk! Bartram's Garden also offers recreational activities on the Schuylkill River, including free boating, free fishing, and cruises to Center City. If you'd rather just do your own thing, the 45-acre property offers plenty of green space to explore or relax. Be sure to check their Twitter to stay up to date on upcoming seasonal events! Get There on SEPTA

Take the Route 36 Trolley to Lindbergh Blvd & 54th Street. Bartram's Garden is only a minute walk from there! Please note: the Route 36 is currently operating bus service on Woodland Avenue between 49th Street and the 40th Street Portal  Plan your trip here.